My first healing in Christian Science occurred when I was thirteen years old, and my testimony was published in a Sentinel in 1925. It was a case of tuberculosis, which was healed after the doctors had given me only a few weeks to live, saying one lung was completely gone and the other one partly gone.

Since then I have had many blessings and healings in Christian Science. When my son was three years old, he opened a can of lye and ate some of it, burning his mouth and face. I left him in distress and went to the telephone to call a practitioner. I told her what had happened, and her first words to me were (Mark 16:18), "'If they drink any deadly thing, it shall not hurt them.'"

Send a comment to the editors
NEXT IN THIS ISSUE
Testimony of Healing
Christian Science has transformed... 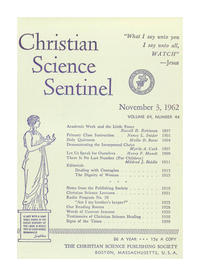