While going through basic training an airman experienced great difficulty because of his TI (training instructor), who opposed what he thought Christian Science to be. Since the airman also lacked confidence, he decided to seek help from an Air Force Chaplain who was a Christian Scientist. Five days later his TI called him into his office and said: "You've been rated among the top ten men in your flight by the other members of your flight. As far as I'm concerned you're the top man."

Expressing surprise, the airman replied, "I don't see how I could be, since I've gotten a couple of 'gigs.'" 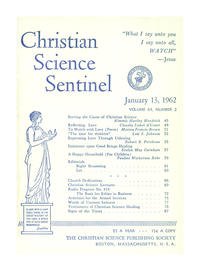