[The above is substantially the text of the program released for broadcast the weekend of September 8 -10 in the radio series. "How Christian Science Heals." heard internationally over approximately 700 stations. This is one of the weekly programs produced by the Christian Science Committee on Publication, 107 Falmouth Street, Boston 15, Massachusetts.]

RADIO PROGRAM No. 417 - God Can Heal Our Children

SPEAKER: I think most of us would agree that certainly some of the most inspiring of Christ Jesus' works were the healings of young people: the nobleman's son the epileptic boy, and Jairus' daughter. Jesus said. "He that believeth on me the works that I do shall he do also." And so in this century many parents have found they too can safely and surely depend on the power of God alone, the same power Jesus taught and proved, to heal their children.

Now I'd like you to meet Mrs. Priscilla MiIner of Kingston. New York, and Patricia, one of the Milners' four daughters. All of them have been greatly helped through Christian Science, and today we're going to hear about two of the healings Patricia had. 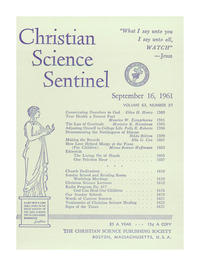