The world in general looks upon man as physical. It assumes, then, that man depends upon fleshly sinews for strength. But Mary Baker Eddy says (The First Church of Christ, Scientist, and Miscellany, p. 162), "Strength is in man, not in muscles; unity and power are not in atom or in dust." This statement is consistent with the record of creation given in the first chapter of Genesis; here we learn that man is the image and likeness of God and hence is not material.

The claim has been made that present-day youths of many sections have become physically soft in recent years, and plans are under consideration for increasing physical fitness. To the physical culturist, rugged exercise, changes in eating habits, and the like, are essential. To the Christian Scientists, normality of activity and temperance in habits are important; and even while accepting the present human need for ruggedness of body, they insist on the basic truth that since God made man, he is always actually existent at the point of strength. 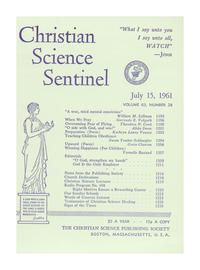