Although several members of...

Although several members of my family had studied Christian Science, my early life included no religious schooling. A series of frustrating business experiences, which had made me feel that my progress was blocked by the greed and selfishness of others, followed by a deeply felt need of security and peace of mind, brought to my thought a relative who attributed his notable success and happiness to the study of Science. However, I did not turn to this religion immediately, although I continued to think about it from time to time.

Two of our older children were then quite young; but their growing curiosity about God found my wife and me with very unsatisfactory answers to their questions. When I mentioned my recurring thoughts about Christian Science to my wife, she responded with enthusiasm. Several in her family had likewise been students of it, and she too had been thinking that perhaps we could find in it a right sense of direction. 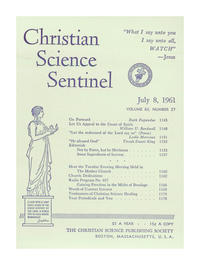