[The above is substantially the text of the program released for broadcast the weekend of March 31–April 2 in the radio series, "How Christian Science Heals," heard internationally over approximately 700 stations. This is one of the weekly programs produced by the Christian Science Committee on Publication, 107 Falmouth Street, Boston 15, Massachusetts.]

RADIO PROGRAM No. 394 - The Challenge of the Resurrection

SPEAKER: Many centuries ago, in the early morning hours before sunrise, an event occurred unparalleled in significance and promise in the world's history. At first it became known to only a few humble folk who at the time were hardly aware of the magnitude of the occasion.

Mary Magdalene had gone in the dark to the sepulcher in which the body of Christ Jesus had been laid following his crucifixion. Mary stood by the sepulcher weeping. As she wept, she stooped down to look for the Master. Unknown to her, Jesus had already risen from the tomb and stood nearby. But Mary was not aware that it was Jesus. 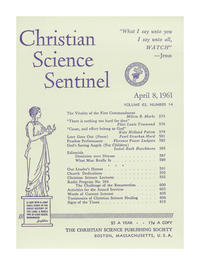