Christian Science was first presented to me when I was in dire need of advice and comfort. It was brought to me as a workable religion, because the religion in which I had been brought up failed to satisfy me. For years I had been very unhappy and overburdened with a great sense of personal responsibility towards members of my family. We went from one crisis to another until I became quite desperate, and my health began to give way under the incessant anxiety and strain.

In the light of inspiration which I gained from Christian Science I caught a glimpse of marvelous possibilities for the future, and I gained the realization that God is responsible for all His children, His spiritual ideas, and that my responsibility was to know that man's true selfhood is an idea of God.

Send a comment to the editors
NEXT IN THIS ISSUE
Testimony of Healing
It is my sincere desire to express... 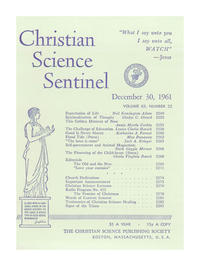