In 1927 after reading from the textbook, Science and Health, which I found in the house where we were making our home, I was led to call on a Christian Science practitioner for treatment. At the close of the first visit, I asked the practitioner if I could stop taking one of the medicines prescribed by a doctor, because it made me very uncomfortable. She told me that if I wanted to have Christian Science treatment, it would be necessary for me to discard all medicine, and she recommended that I study the ninety-first Psalm.

I followed her advice, and within a few hours I received a healing of fear of death, and I was able to sleep naturally for the first time in many months. Within a few weeks I was healed not only of rheumatism, for which I had requested treatment, but also of many other disorders from which I had suffered. 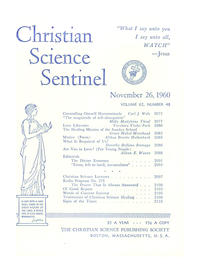