R. Lugar Webley in a letter to the editor of the Wellington Evening Post Wellington, New Zealand

It was with great thankfulness that I found in your [newspaper] a statement by no less a person than Lord Cobham, and a week earlier a similar one by Mr. Thomson of the Carter Observatory, both referring to "science and the Church." Surely we 20th century "enlightened people" must be beginning to realise some of the truths Jesus came to Earth to teach us, not the least being, that there is no death.... 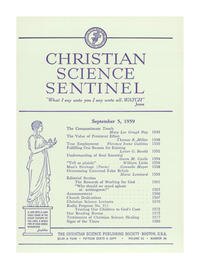