My experience proves that the...

My experience proves that the understanding gained from the study and application of the truth contained in Science and Health by Mrs. Eddy does heal. When I got out of bed one morning my legs failed me, and I was unable to stand up. A neighbor found me and reported my condition to some of my friends who were Christian Scientists. They called a practitioner. Although it appeared that I might be passing on, I firmly held to the truth. With the help of the practitioner I began to improve, and after a while I was able to be up and doing my usual work.

This same practitioner was called again one afternoon when I was bitten by a large dog which sprang from behind some lumber just as I was getting into my car. The dog inflicted a severe wound on my leg. Some people who happened to see the incident rushed up and offered to take me to a doctor, but I assured them that I did not need a doctor. A bandage was put on the leg to stop the bleeding. Then I drove seven miles with the pianist who assisted me in my dancing classes. I did not tell her of the incident but silently declared, "I am really all right, no matter what the material condition may be." After a few days, in which I continued holding to the truth, I was quite all right, and there were no aftereffects.

Send a comment to the editors
NEXT IN THIS ISSUE
Testimony of Healing
As a child I was constantly... 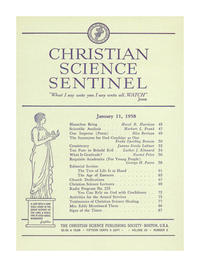