A SPIRITUAL DECLARATION OF INDEPENDENCE

About a century after the birth of the American nation Mary Baker Eddy gave to the world her revelation of the liberating truth of Christian Science, which can be applied to the solution of physical, financial, and moral problems and to all the complexities of human relationships. On page 106 of "Science and Health with Key to the Scriptures," which was first published in 1875, she writes: "Like our nation, Christian Science has its Declaration of Independence. God has endowed man with inalienable rights, among which are self-government, reason, and conscience. Man is properly self-governed only when he is guided rightly and governed by his Maker, divine Truth and Love."

Christian Science shows that nothing less than a change of thought from a material to a spiritual basis can bring human affairs under God's government and establish the fact of man's freedom from the tyrannies of the carnal mind. All materiality, manifested in physical, moral, and social ills, originates in the belief in a selfhood apart from God. Actually, man is spiritual and perfect, the image and likeness of God. He is the idea of one all-inclusive Mind, reflects its ceaseless intelligence, and can never be in conflict with any other idea. 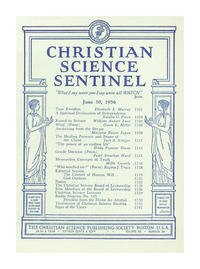