In the light of a dictionary definition of the word object as "a conception formed by the mind itself," Mary Baker Eddy's statement concerning Love's object, found on page 304 of "Science and Health with Key to the Scriptures," takes on fresh meaning. Here are her words: "This is the doctrine of Christian Science: that divine Love cannot be deprived of its manifestation, or object; that joy cannot be turned into sorrow, for sorrow is not the master of joy; that good can never produce evil; that matter can never produce mind nor life result in death." Mrs. Eddy goes on to assure us that perfect man, being under the control of his Principle, remains sinless and eternal.

These comforting truths, which Christian Science reveals, show the inseparable relationship of God and man, Mind and idea, cause and effect, Love and its object. Man, being Love's object, is not external to Love, but is included in it as Love's own idea. And as a conception formed by Mind itself, man can never wander from Mind's control. In fact, because man is Love's object, or idea, he may be said to be the objective state of divine Mind; and it is thus that one should identify himself and all the creatures of God's making. 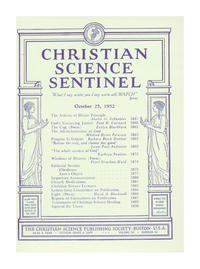