No reaction from the dummies. Only intelligence responds

When a young student of Christian Science, the writer entered a large audience chamber of a museum and saw a number of frock-coated gentlemen standing in small groups. They were silent and evidently absorbed in serious business. The surprised intruder experienced all the familiar reactions of self-consciousness, which he always felt when suddenly confronted by strangers. However, as no one moved or even spoke, he observed the figures more closely and discovered that they were mere effigies of certain statesmen, arranged to represent a historical occasion.

Here indeed was food for thought. Although the writer had been as much alone after as before entering the room, he had experienced reactions that he had heretofore attributed solely to the presence of other mentalities. This was positive proof that the unnatural inhibitions which arose and resulted in aloofness and unresponsiveness came from within his consciousness and not from that of others. Now that the error had been uncovered, he decided, it would be much easier to destroy it. Having jurisdiction over his own thinking, he resolved to make a more strenuous effort to replace this false self-centeredness with a clear recognition of his true selfhood in the likeness of God, harmonious Spirit, perfect Mind. Faithful persistence in this effort led to his healing. 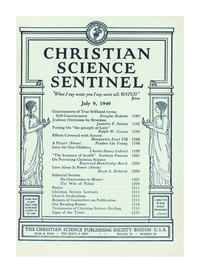