GETTING ALONG WITH OTHERS

The problems of human relationship confront many at one time or another, and much has been written and said regarding their solution. However, if they are discussed with the thought of merely changing, not healing, an erroneous human situation, the discussion is based on the belief of minds many, which is the origin of the problem and can in no possible way be its solvent. The solution can be found only as one gains a clearer understanding of the one divine Mind, God, and His creation and the unfoldment of the divine order.

The human mind is always prone to think in extremes, and it often does so in regard to the problems of human relationship. Either the relationship is exalted to an almost idolatrous family worship or there is the attitude of ignoring it. Neither of these states of thought is a manifestation of the divine Mind or an aid in solving the problem. Divine Mind knows man as its own idea. God is man's Father and Mother, and all ideas are the offspring of that one divine, omnipotent Mind. Man is the reflection of God, not the descendant of a mortal. Man's relationship to God and to His idea is established in the divine order and not founded on any false material law of genealogy. Just as in mathematics the rules govern the relationship of numbers, so spiritual law governs man's relationship to God and to every idea, and it is wholly good and right for all.

Send a comment to the editors
NEXT IN THIS ISSUE
Article
WHY STAND AGHAST? 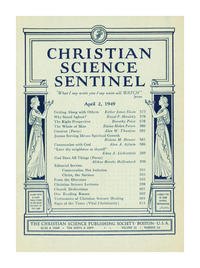