A member of Mrs. Eddy's "class of seventy" looks back at that inspired gathering

Christian Scientists have just passed several anniversaries of deep importance to them. It is well remembered that on September 1, 1898, the Christian Science Sentinel was presented as a gift from our Leader, Mary Baker Eddy, to the world. Of this gift she says, "The second I entitled Sentinel, intended to hold guard over Truth, Life, and Love" (The First Church of Christ, Scientist, and Miscellany, p. 353). Previous to that time, the only periodical other than the Christian Science Quarterly which our Leader had given to the movement was The Christian Science Journal, launched in 1883. It was therefore with great joy that the Sentinel was received by the Field.

Ten years later our great newspaper, The Christian Science Monitor, was established, and forty years ago this past Thanksgiving its first copy was presented to our Leader by several Christian Scientists who went to Chestnut Hill on this joyful errand. Our Leader had been informed that she was to be presented with this copy of her paper, and when she saw it in the hands of one of the messengers, she came forward with joyful step, held out both her hands, and received the paper, which she pressed to her heart, her face radiant with happiness. On this fortieth anniversary we all united in unmeasured gratitude for this world missionary, our Leader's generous gift to mankind. 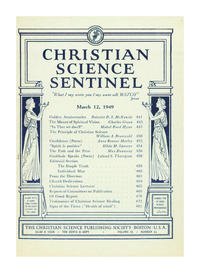