THERE IS NO SEPARATION IN GOOD

A woman who had been greatly inspired by the message of a Christian Science lecture felt impelled to thank the lecturer. In the conversation she referred to her son who was in the armed services of his country and who was then stationed in a distant part of the United States. She said that since she had not heard from him for some time, it was possible that he was being moved. The lecturer's reply was, "Don't locate him."

Not fully realizing what he was telling her, she continued to discuss the possibility that her son was being sent to a foreign country. The lecturer this time very quietly, but emphatically, said something to this effect: "Don't locate him. Keep him in consciousness. That is where all the good you know of him is and where you really are. Then you will have no sense of separation." He continued to bring out that the understanding of man's inseparability from God faithfully held to would protect her son wherever he was, and it would also help to protect those with whom he was serving; while to locate him in materiality would, in belief, subject him to the dangers threatening the country where he might be stationed. A glimpse of the real meaning of that message flooded her consciousness, bringing unspeakable peace. 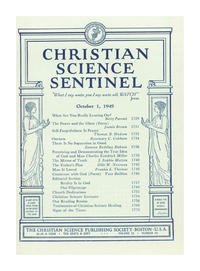