SPIRITUAL FACTS ARE THE ONLY REALITIES

In the third chapter of John is recorded a conversation that took place between Jesus and Nicodemus in which Jesus told this ruler of the Jews that he must be born again before he could enter the kingdom of God. Nicodemus questioned how this could be, and Jesus replied (verses 5–7): "Except a man be born of water and of the Spirit, he cannot enter into the kingdom of God. That which is born of the flesh is flesh; and that which is born of the Spirit is spirit. Marvel not that I said unto thee. Ye must be born again." Thus did Jesus point out to Nicodemus that thought must be purified and spiritualized before one can enter the kingdom of God, the realm of Spirit.

In the spiritual record of creation, in the first chapter of Genesis, man has his origin in God and images forth or expresses the nature of his creator. The various mythical material theories as to man's origin that have since appeared declare that man springs from matter. In its process of evolution matter is supposed in some mysterious way to take on a mental quality, finally to emerge as a so-called man who is a combination of mind and matter. According to these material theories, the emergence of a mortal into earthly existence includes the following: sin, fear, disease, decline, death. This sum total of human error Mary Baker Eddy terms mortal mind or animal magnetism, of which she writes in "Science and Health with Key to the Scriptures" (pp. 450, 451): "Who, that has felt the perilous beliefs in life, substance, and intelligence separated from God, can say that there is no error of belief? Knowing the claim of animal magnetism, that all evil combines in the belief of life, substance, and intelligence in matter, electricity, animal nature, and organic life, who will deny that these are the errors which Truth must and will annihilate?" 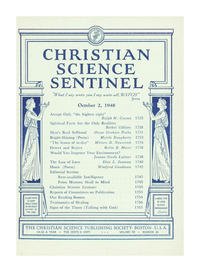