Bread lines were a familiar sight in many countries during the war and first postwar years. The representative of The Christian Science Board of Directors sent to Germany some months ago found them there, but he also found, figuratively speaking, long lines of individuals eagerly waiting for the bread of Life to satisfy their hunger for spiritual things. They had been practically deprived of this nourishment since early in June, 1941, when Christian Science was banned in Germany.

Gestapo officials all over Germany closed Christian Science churches and Reading Rooms, confiscated all literature, visited practically all known adherents of Christian Science, and took most of them to Gestapo headquarters. After being questioned the majority of them were released, but some were detained for days, weeks, months, and a few even for years in prisons or concentration camps. At the time of their release all were forbidden to practice their religion, to display an interest in it, or to get together with other Christian Scientists. They were forbidden to leave their home towns without special permission; their mail was censored; their telephones were tapped. In addition to the hardships and isolation to which this subjected them, they later shared with other Germans the trying experiences of bombings and evacuations. Thus most of them lost contact with their fellow Christian Scientists.

Send a comment to the editors
NEXT IN THIS ISSUE
Testimony of Healing
With gratitude for all the blessings... 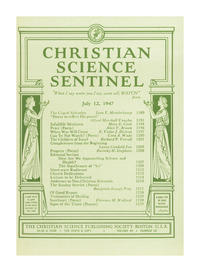