With a heart overflowing with...

With a heart overflowing with thanksgiving I give this testimony of the all-power of divine Science. "The true understanding of God is spiritual. It robs the grave of victory," writes Mary Baker Eddy on page 275 of "Science and Health with Key to the Scriptures." How true are these words!

From the age of twenty I suffered from stomach trouble. I had consulted many doctors and taken many drugs, some of which relieved me for a short time. I also followed diets, which sometimes brought results, but they also were only temporary. When I was nearly sixty I suffered so greatly that I decided to have an X ray taken. This revealed an ulcer. I was given a new diet and a treatment by injection. "If that doesn't do you any good," said the X-ray specialist, "there is nothing left but to operate." For about eighteen months I seemed to feel better, then my state became worse. I was worn out and had to keep to my bed. I was very unhappy, and this millstone which had been weighing me down all my life, which had robbed me of all my joy and had made me extremely irritable, now threatened to crush me.

Send a comment to the editors
NEXT IN THIS ISSUE
Testimony of Healing
I am glad of this opportunity to... 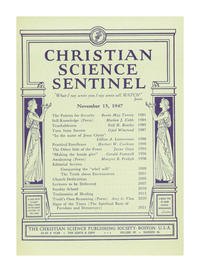