The Stability of Our Times

Stability cannot be thought of in terms of matter, material substance, knowledge, or so-called scientific research. Stability can be thought of only in terms of changeless spiritual verities. Because true stability is found only in spiritual values it remains rooted and grounded in divine Principle as eternal as Spirit, God, Himself. This stability is unmoved by the mockeries of materialism unshaken by Hiroshima or Bikini. Outside the realm of almighty Mind, whose immutable law is omnipotent, there is no stability.

Though men may build their material structure of living to the heavens, though they may with astronomical vastness and mathematical certainty explore and measure heaven and earth, though they may split the material atom to the destruction of matter, unless their lives are built on the chief cornerstone of Truth, of spiritual reality—the "stone which the builders rejected"—it is a fabrication of falsity, without stability or reality. 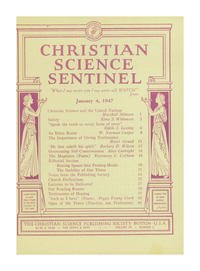