One day a student of Christian Science found himself with several problems that did not seem to yield readily to the truth. The harder he worked, the farther away from the solution he seemed. He felt like a modern Atlas weighed down with the burdens of the world. In self-righteousness he justified this burdened sense of things with the thought that possibly this was the cross that he must bear. Then he turned to his Bible and prayed that divine Mind would show him the way. His attention was arrested by two verses he did not remember having read before (Jer. 23:33, 36): "And when this people, or the prophet, or a priest, shall ask thee, saying, What is the burden of the Lord? thou shalt then say unto them, What burden?... And the burden of the Lord shall ye mention no more: for every man's word shall be his burden."

The Scientist saw now where his error had been. He had been thinking in terms of "the burden of the Lord," for he had been regarding Life, which is God, as a burden. Now he saw that Life is that sustaining divine force which forever upholds its ideas. He realized that man does not bear up under Life, but rather that divine Life bears man up upon its wings of inspiration and power. He saw that instead of taking on a sense of grave responsibilities, he must recognize that "the government shall be upon his shoulder" (Isa. 9:6). God has no burdens; and man, His image and likeness, cannot assume any. To assume a burden is to accept an illusion, for God never creates or permits a burden. "For every man's word shall be his burden." It is only in false concepts of God and man that a burdened sense of things is found. 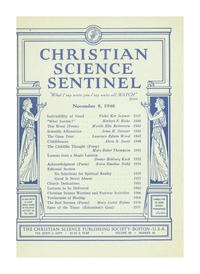