Christian Science came to me when I was a very young woman. I was so ill physically that I could not take a quick step and was mentally so darkened that there did not seem to be a ray of light for me. All hope of recovery had gone when a friend called who we knew had been very ill but was then in fine health. He told us that it was Christian Science that had healed him. We had never heard the words before and were very much interested in hearing about this Science. He asked me to go to see a Christian Science practitioner, as he was sure that I would be healed also. I replied, "Oh, no; what the doctors and specialists cannot do for me, no one else can." But before he left I had promised to go to see a practitioner once.

The next day just to keep my promise I called to see a practitioner for help. Almost the first thing he said was something about a book he wanted me to read. I replied, "No, I am too ill to read any book; I have come here to be healed; if you can heal me, why all right." I was not very polite. That evening after returning home I commenced to feel better, and the next day I found myself wanting to go again of my own accord, which I did. I stopped my medical treatments and went the next day and the next for about a week. Then I said to the practitioner: "You said something to me about a book; now I am ready to read it. I feel so much better, and know that the hand of God must be in it." He replied, "The book is 'Science and Health with Key to the Scriptures' by Mary Baker Eddy." I commenced reading the book, but without much hope of being healed, or even benefited.

Send a comment to the editors
NEXT IN THIS ISSUE
Testimony of Healing
I am most grateful to God for... 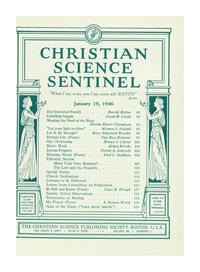