I am indeed grateful to God for...

I am indeed grateful to God for all the blessings I have received since becoming a student of Christian Science. Twenty-eight years ago I seemed to be in a desperate situation. I had been unable to do any work for several months and had been in a sanatorium, under the care of specialists, without making any real progress towards regaining health. The condition was diagnosed as tuberculosis, and, in the opinion of the doctors who attended me, was not curable. Being willing to try anything which might help me to regain health, I went to see a Christian Science practitioner, and again it was proved that "man's extremity is God's opportunity." Through the consecrated work of the practitioner the healing was accomplished, and within two weeks I joyfully returned to work and have been active ever since.

God, as revealed by Christian Science, has been my only physician ever since this first healing, and my every need has been met. Some healings have come quickly, others slowly, but all have brought a lesson. I have been healed of many physical ills, business problems have been solved, and I have gained some understanding of the presence and power of God. 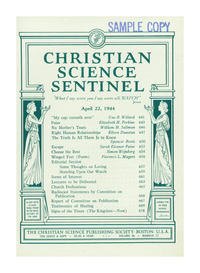