Most of us are familiar with the dramatic scenes pictured in the eighteenth chapter of St. John's Gospel. But because of the persistence of the question, "What is truth?" it may be well to review the circumstances which led to Pilate's asking it. Jesus, having predicted his betrayal, went with his disciples to the garden "over the brook Cedron." where he had often gone before. Upon his arrest, which took place there, he was taken before Annas, who inquired concerning his doctrine. Jesus did not equivocate, He had preached openly in the synagogue and in the temple, and so he referred the high priest to those who had heard him for an account of his teachings. Apparently at a loss what to do, Annas sent the Master to caiaphas, who in turn led Jesus to the Roman procurator, Pilate, for final judgment. Pilate already had been told that Jesus claimed to be King of the Jews. To his inquiry, "What hast thou done?" Jesus answered: "My kingdom is not of this world. ... To this end was I born, and for this cause came I into the world, that I should bear witness unto the truth. Every one that is of the truth heareth my voice." "What is truth?" asked Pilate, little realizing that this question would be echoed and re-echoed through the succeeding centuries.

John does not tell us Jesus' answer. Whether Jesus made any answer we do not know, but we do know that the Scriptures which he constantly cited as his authority, his words and deeds, and the writings of Mary Baker Eddy give us the complete and practical answer to this all-important inquiry. 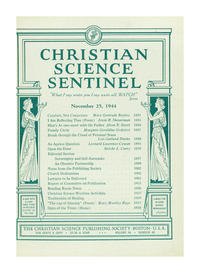