When the European War broke...

When the European War broke out in 1939 it terminated a business in which I had been for about fifteen years. The few years prior to 1939 my business had been severely affected by war scares, my funds were nonexistent, and I wanted to get married. Naturally, having been brought up in Christian Science, I began to apply my knowledge of it to this problem of lack. My teacher and practitioner worked for me, and in addition to my metaphysical efforts I did such work as seemed to be indicated to find myself a position in an entirely new field of endeavor.

I could write pages on the minor demonstrations of supply which blessed me in this period, but still no job opened up. Asking the practitioner to continue working, I told him that I felt that I had done all I could to get work I thought I was fitted for, and now I was going to "be still," and realize God's presence. Part-time jobs of various kinds kept me busy, and my fiancée and I were married. Shortly after this our prayerful work" bore fruit. I was engaged for very interesting work in a fine organization, at a starting salary which was most satisfactory.

Send a comment to the editors
NEXT IN THIS ISSUE
Testimony of Healing
My gratitude to God for Christian Science... 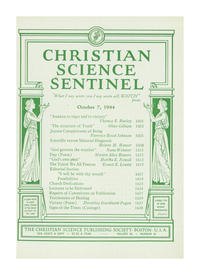