A Citizen who joins the forces in a time of national emergency learns many lessons in self-denial, self-discipline, and devotion.

His country needs him; therefore he is willing to endure hardships and face dangers for his country's sake. He does not question the right of his government to make laws and statutes to regulate his way of life, means of transport and supply. He is willing to leave the plan of campaign in the hands of experts, and hastens to obey orders without demur, confident that they have been wisely conceived by competent commanders. He knows that the plan of campaign must necessarily be kept a close secret, and that even his own whereabouts should not be generally disclosed. He is content to take an individual part in the struggle without trying to fathom the strategy of the whole campaign. 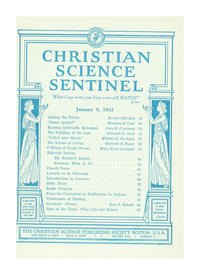