Casting Down the Accuser

The first chapter of Genesis describes God's spiritual creation. It states that man is created in the image and likeness of God. Man is therefore the beloved child of God, the offspring of Spirit. He is endowed with divine intelligence; his vision is established in Soul, illumined by the light of Spirit; hence, he has the ability and capacity to reflect his creator. Through His spiritual creation is God made manifest, expressing His vitalizing power and goodness in one harmonious whole. Corroborating the Scriptural record that "God saw every thing that he had made, and, behold, it was very good," Mary Baker Eddy says in "Science and Health with Key to the Scriptures" (p. 519), "Deity was satisfied with His work."

Mortal mind sees creation through its own erroneous concepts and classifies man as material instead of spiritual. Into this material atmosphere enters the serpent, accusing man of being imperfect and inharmonious. This serpent, operating through accusations, spreads discontent and dissatisfaction wherever it can obtain an audience. It claims that there are discrepancies here and there; that man is subject to sin, sickness, and death, to lack and confusion; that there are two powers, one good and one evil, warring forever with each other, with the balance of power overwhelmingly on the side of evil. What a contrast to the real creation! 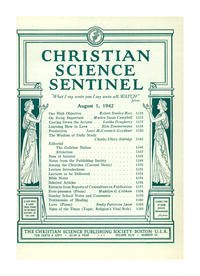