I am deeply grateful for the...

I am deeply grateful for the many blessings I have received through Christian Science over a number of years. I have many times proved its healing power. I was evacuated with the Australian Imperial Force Pay Corps in the country, when early one morning I fell down a flight of stairs at the house in which I was billeted, and sustained concussion of the brain and an impacted fracture of the left arm. When I was picked up I was unconscious, and since I was amongst strangers a doctor was called in. He bound up my head, which had been cut open in three places, but when I regained consciousness I asked for a telephone call to be put through to my brother in London.

My brother arrived in the afternoon, and after a very helpful talk went home and got in touch with a practitioner. The healing of the head must have been almost instantaneous, for I never felt any pain or even a headache.

Send a comment to the editors
NEXT IN THIS ISSUE
Testimony of Healing
Christian Science has healed me... 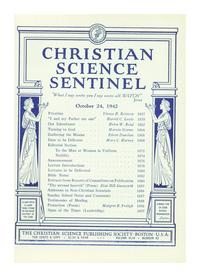