One day a Christian Scientist, looking out of her kitchen window, observed that a little squirrel had come to visit a tree upon which had been hung a container of fat for the birds. The squirrel nibbled for a while and left. The next day he returned; but this time he tried to take his newly discovered treasure with him. He failed. Each day for a week the little fellow returned and made a fresh start to gain that which in his sight was needful and good. On the seventh day, he made such a determined effort that he was able to lift the container off the nail which had held it in place. The obstruction as far as he was concerned yielded under the pressure of faithful, persistent effort.

Well might we reflect upon the lessons our small friends of nature teach us. We, too, as the squirrel, can behold the treasure which we seek, and which seems to be so far beyond our present reach only because we fail to exercise the persistent effort that brings a happy reward. 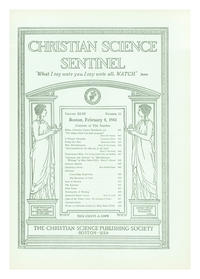