Christian Scientists can effectively contribute to "the healing of the nations" by linking the sense of defense to the spiritual protection promised in the Bible. Adequate defense resolves itself into a need for a fuller understanding of God and of man as God's reflection. The self-imposed limitations of material thinking render individuals and nations insecure. The enemy from which we need protection is not primarily this or that nation or group of nations, but the erroneous concept of man as material, as separated from God and hence subject to discordant conditions. The defeat of this enemy of false belief requires an understanding of protection as spiritual.

The alert Christian Scientist will think of true defense in terms of all mankind's protection against belief in matter, expressed in war and other forms of discord. True defense, then, is achieved by obtaining a better comprehension of Truth, for, as Paul declared, "The weapons of our warfare are not carnal, but mighty through God to the pulling down of strong holds." As men increase their spiritual preparedness and grow in the consciousness of their spiritual unity with God, the human need for peace will be met. 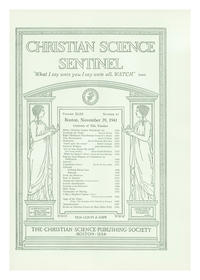