"The panoply of Love"

"Clad in the panoply of Love, human hatred cannot reach you," affirms our Leader, Mary Baker Eddy, in "Science and Health with Key to the Scriptures" (p. 571). And alert students of Christian Science are daily proving the truth of this inspired statement, drawn from the deep experience of her who dared to found and establish this great movement, in the face of the opposition offered by the vested interests of opposing systems. That we may the more fully demonstrate the truth of Mrs. Eddy's words in the conduct of our own affairs, it behooves us to consider the nature of this "panoply of Love"—this protective armor, which is impervious to the shafts of hatred and malice, or to any other type of assault.

The term "panoply" is often used to designate a beautiful or magnificent covering, and such, indeed, is the covering of Love; but its literal sense is even more significant, for it is derived from the Greek words pan ("all" or "complete") and hopla ("armor"). Hence, "the panoply of Love" is nothing less than the complete armor of divine Love. Our Leader's words may be said to carry on the thought of the Apostle Paul, which he expressed to the members of the church at Ephesus in Asia Minor: "Put on the whole armour of God, that ye may be able to stand against the wiles of the devil" (Ephesians 6:11). Ephesus was widely known as a center of magic arts and pagan worship; and in view of this, the apostle's advice was exceedingly pertinent. A study of Paul's other letters and of the book of Acts reveals that much "human hatred" had been aroused in Ephesus because of the widespread advance of Christianity in that city, but Christians then as now were enabled to wear "the whole armour" of the God who is Love.

Send a comment to the editors
NEXT IN THIS ISSUE
Article
"Could ye not watch ... one hour?" 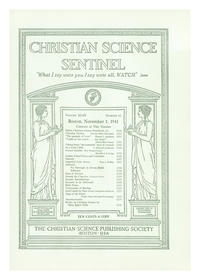