The Allness of God

On pages 9 and 10 of "Unity of Good" Mrs. Eddy writes, "By knowing the unreality of disease, sin, and death, you demonstrate the allness of God." Thus does she sum up in this one remarkable sentence the process by which healing and regeneration are to be accomplished, and at the same time point out the difference between Christian Science and all other systems. Religious teachers of all time have believed that sin is real and powerful, and have tried to correct it by argument and persuasion. Medical theories have held that disease is real and to be feared, and then have attempted its cure by material methods. Our Leader has written in the Christian Science textbook, "Science and Health with Key to the Scriptures" (p. 450), "The Christian Scientist has enlisted to lessen evil, disease, and death; and he will overcome them by understanding their nothingness and the allness of God, or good."

The student of Christian Science may well ponder these concise passages, for in them he will find the recipe for all metaphysical healing. His education may have been along the lines of medical theories which he believed to be law. Inherited beliefs may have enslaved him. His mistaken concept of religion or a lack of spiritual training may have hampered clear and logical thinking. Sin, perhaps, has appeared attractive, and fettered him with some unwholesome habit he has thought necessary to his happiness and success. All of these outworn concepts will go down before a dawning consciousness of the allness of God. Our Master, Christ Jesus, said, "Ye shall know the truth, and the truth shall make you free."

Send a comment to the editors
NEXT IN THIS ISSUE
Article
"How many loaves have ye?" 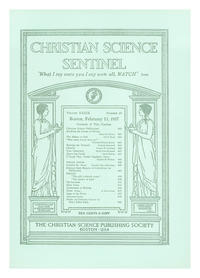