The world's urgent need of an enlightened public opinion was forcefully set forth by the American Ambassador to Great Britain in one of his earliest official addresses. "At no time," the Ambassador told the Institute of Journalists in London, "has an enlightened public opinion been more necessary than now. The world seems floundering in a morass of uncertainty from which it can be extricated apparently not so much by what governments say or do, as by an understanding on the part of the peoples themselves of the nature of the forces which have overtaken us and what it may be necessary to do in combating them."

To help create and to serve an enlightened public opinion is one of the guiding purposes of The Christian Science Monitor. When the Discoverer and Founder of Christian Science, Mary Baker Eddy, established it nearly a quarter of a century ago, she did not merely add another newspaper to the world's already overcrowded journalistic industry. She did more than that; she introduced a new concept of journalism and established new practices in newspaper editing. 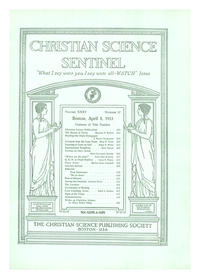