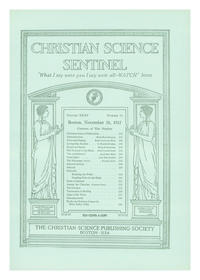 THE purpose of a Christian Science treatment, or prayer, is to awaken one to utilize spiritual sense, whereby he may perceive spiritual truth.
Article

FOR many generations men and women have been interested in the study of voice culture and singing.
Article

The Demand of the Hour

THE fact that the length of time known as a day is subdivided into shorter intervals known as hours tends often to serve as a subtle excuse for postponement or procrastination.
Article

ALL over the world today a tired, puzzled humanity is groping for a path which will lead it out of the maze of variable theories regarding health, supply, employment, human relations, and disturbed conditions into a haven of peace, into a state of individual opportunity which has ever been considered the utopia of mankind.
Article

HOW comfortable it may seem to sit down part way up a mountain and feel the solid security of one's resting place! But how undeniable that mere sitting, no matter how enchanting the view or how desirable the nook, will not bring us one inch nearer the summit ! And how simple it appears to trust in the understanding of practitioners and those who have prepared the path farther for the solving of one's perplexing problems!
Poem

The golden afternoon was drawing to a close, And the still peace of evening filled the sky; The drowsy air was hushed around the well Whereon the traveler rested, And the quiet benediction of the evening Deepened into glory with his presence.
Article

In a letter published in your issue of October 18, a...

In a letter published in your issue of October 18, a clergyman respectfully takes exception to a statement made by a Christian Science lecturer.
Article

In your issue of April 9, you review an article entitled...

Richard O. Shimer, Committee on Publication for the State of Indiana, - Richmond

In your issue of April 9, you review an article entitled "The Hindu Invasion of America," and assert that Christian Science approaches Hinduism very closely, and that according to the article in question Mary Baker Eddy owed the foundation of her idea to Hinduism.
Article

"Lift up your eyes, and look on the fields; for they are...

"Lift up your eyes, and look on the fields; for they are white already to harvest.
Article

Your correspondent, "J.L.," in criticizing the lecture on...

Although the Christian Scientist may be in no doubt as to the truth of God's allness and of the unreality of matter and evil, sometimes he is aware that he is not realizing the truth as clearly as he should.
Editorial

Standing Firm for the Right

Many sermons have been delivered by Christian ministers, many articles have been written by moralists, and deep emotion has been felt by Bible students over the thricerepeated denial of Christ Jesus by Simon Barjona, the night before the crucifixion.
Items of Interest

Occasionally one who reads an article in an out-of-print issue of the Christian Science periodicals which he would like to preserve for his own personal use, desires to copy it, and he wonders why in some Christian Science Reading Rooms there is a rule that copying will not be permitted.
Article

Lecture in The Mother Church

Christian Science came into my life when I was a young...

Christian Science came into my life when I was a young girl.
Testimony of Healing

About seven years ago I called at a Christian Science Reading Room...

About seven years ago I called at a Christian Science Reading Room to borrow a copy of the Christian Science textbook, "Science and Health with Key to the Scriptures" by Mary Baker Eddy, which was lovingly lent me.
Testimony of Healing

It is with a deep sense of gratitude that I tell of the...

It is with a deep sense of gratitude that I tell of the numerous blessings brought into my life through the study and application of Christian Science.
Testimony of Healing

I am most grateful for the blessings which Christian Science...

I am most grateful for the blessings which Christian Science has brought into my life.
Testimony of Healing

I have been a student of Christian Science since 1912, and...

I have been a student of Christian Science since 1912, and have had many healings and blessings.
Testimony of Healing

Christian Science was given to me as a very little child...

Christian Science was given to me as a very little child through the beneficent influence of my grandmother, a devoted practitioner in the Field for many years.
Testimony of Healing

It is a great joy to testify to the healing efficacy of...

It is a great joy to testify to the healing efficacy of Christian Science and to express gratitude for the many benefits received through its ministry.
Testimony of Healing

Words cannot express the gratitude I feel for Christian Science

Words cannot express the gratitude I feel for Christian Science.
Testimony of Healing

Christian Science has met all my needs

Christian Science has met all my needs.
Article