THE subject of congregational singing in Christian Science churches is one that merits careful attention, impressing the stranger, as it does, with a sense of power and joy when the hymns are well rendered. A not inconsiderable part of the time allotted to each service is occupied by congregational singing, and it is one of the avenues through which each one may assist in voicing the healing message. It is therefore our part to render the hymns in a manner befitting their high standard.

With the people in Bible times, song was a prominent part of worship. It was not merely a rite, but expressed a yearning after spiritual ideals. They sang their way through and out of numberless difficulties. In their attacks upon the enemy, the armies were often preceded by singers. Then, as at other times, they sang of the majesty of the Lord; they sang of His mercy and judgment, of His laws and His statutes, of His righteousness, of His power and strength. They sang, "for he hath triumphed"! Again, they sang with grace in their hearts, making melody unto the Lord; they sang with the spirit; they sang with the understanding, also; they sang praises and psalms of thanksgiving. And in Mark's Gospel it is recorded that, just before the crucifixion, Jesus and his disciples, having "sung an hymn, . . . went out into the mount of Olives." In Revelation, John writes of the redeemed that they sang a new song.

Send a comment to the editors
NEXT IN THIS ISSUE
Article
In a list of events which occurred twenty-five years ago,... 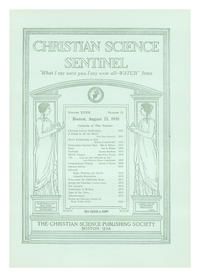