A student who was studying for his final law examination borrowed a legal textbook from a friend. This friend had qualified some years previously, but had been successful only after several attempts. The borrowed textbook revealed the reason for the delayed success. Many of its pages were so annotated as to show that instead of trying to learn the meaning of the text, the owner had endeavored to make the text conform to his own immature knowledge of the subject.

For centuries the King James Version of the Bible has been regarded as the most beautiful piece of English literature in the world. It has brought courage and comfort to untold thousands; but to Mary Baker Eddy, the Discoverer and Founder of Christian Science, it was revealed as something more than that. To her it was revealed as a textbook explanatory of the spiritual law of God; and from her understanding of the inspired Word she has given us the Christian Science textbook, "Science and Health with Key to the Scriptures." Of this book Mrs. Eddy writes, in part (ibid., p. 456): "A Christian Scientist requires my work Science and Health for his textbook, and so do all his students and patients. Why? First: Because it is the voice of Truth to this age, and contains the full statement of Christian Science, or the Science of healing through Mind." 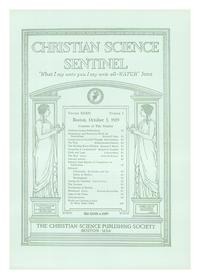