A correspondent asks in your recent issue to have a...

A correspondent asks in your recent issue to have a point explained by Christian Scientists which he has been trying to disprove for many years. "If, according to Christian Science," he says, "there is but one creator, who made everything perfect and without a possibility of even conceiving wrong, who is there to deceive or be deceived? Surely the answer must be, no one." Christian Scientists do not deny that this so-called evil sense, deceiving the whole world, seems to be believed and accepted by the human mind, nor do they deny that sin, disease, and death, the evidences of the material senses, appear as solid facts to the sufferer and to the onlooker. Christian Scientists differentiate, however, between that which is real and that which is unreal; that is to say, between that which God created and pronounced "very good," and that which He did not create, namely, the seeming reversal of those good and permanent verities which, having no origin in Deity, are but fleeting shadows of what is termed the human mind. Christ Jesus, when he came to the world, found the same beliefs as appear to flourish to-day. He came to give "knowledge of salvation unto his people," to give "light to them that sit in darkness and in the shadow of death." "The only begotten Son, which is in the bosom of the Father, he hath declared him;" and in declaring the truth about the creator and His works, he sought to deliver humanity from the beliefs of the flesh, from a misconception of being. Just as we look to the sun and its rays to dispel darkness, so did the Savior destroy the beliefs of sin, disease, and death, by looking to the mighty actuality of a God who is "of purer eyes than to behold evil."

Christian Scientists, in striving to follow the Way-shower, Christ Jesus, find that as they look steadfastly to God as the only cause and creator, and to the understanding of man in His image and likeness, the sense of evil comprising believer and belief, deceiver and deceived, proportionately diminishes; and thus they prove that a great reality, an everlasting fact, is being established in the earth, displacing, little by little, all belief in an opposite cause or power. The Discoverer and Founder of Christian Science, Mary Baker Eddy, writes on page 207 of the Christian Science textbook, "Science and Health with Key to the Scriptures": "There is but one primal cause. Therefore there can be no effect from any other cause, and there can be no reality in aught which does not proceed from this great and only cause. Sin, sicknes, disease, and death belong not to the Science of being. They are the errors, which presuppose the absence of Truth, Life, or Love."

Send a comment to the editors
NEXT IN THIS ISSUE
Article
References to Christian Science in your recent issue which... 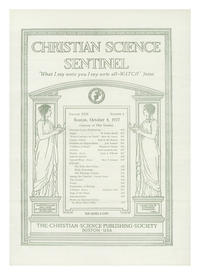