Christian Scientists do not "boast" of their ability to...

Christian Scientists do not "boast" of their ability to understand the Mind of the Master, his miracles, his method, and the source of his power. They most certainly do, however, lay stress on the works of our Master, and point to the fact that those works were accomplished by spiritual means alone, that "with God all things are possible," and that the disciples and members of the early Christian Church healed the sick and even, it is recorded, raised the dead. They further maintain, in accordance with our Master's statement, that those works can be accomplished by any one to-day just in the exact proportion that such a one reflects the Mind of Christ and follows the narrow path of life eternal laid down by Christ Jesus. And they gratefully acknowledge that whatever good they have been able to accomplish, in helping humanity by reforming the sinner and healing the sick, has been made possible by their study of the Bible in conjunction with the Christian Science textbook, "Science and Health with Key to the Scriptures" by Mary Baker Eddy.

There are certainly several references to physicians in the Bible, but we are not aware of any reference which supports the theory held apparently by at least two of the critics—that knowledge of material methods, human anatomy, and medicine formed part of or had a place in the teachings of Christ Jesus. On the contrary, our Master said to Nicodemus: "That which is born of the flesh is flesh; and that which is born of the Spirit is spirit. Marvel not that I said unto thee, Ye must be born again."

Send a comment to the editors
NEXT IN THIS ISSUE
Article
Your editorial page of recent date contained a criticism... 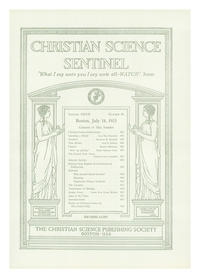