Humanity was perplexed in Bible times over the same problems which trouble it to-day. Jesus' disciples, on seeing a man who had been blind from birth, once asked him, "Master, who did sin, this man, or his parents, that he was born blind?" Thus did evil, at that time as in the present day, try either to attach itself directly to one or to trick him into attaching it to some one else.

In divers ways our patient, loving Way-shower proved his words concerning the devil (evil). "He was a murderer from the beginning," Jesus said, "and abode not in the truth, because there is no truth in him. When he speaketh a lie, he speaketh of his own: for he is a liar, and the father of it." When evil seemed personal to the disciples in the instance of the one born blind, Jesus' reply was, "Neither hath this man sinned, nor his parents: but that the works of God should be made manifest in him;" which is to say, Do not hold evil as personal, but see the opportunity to make manifest the works or law of God. Mrs. Eddy, in further acceptance of this same truth, in "Science and Health with Key to the Scriptures" (p. 186), says: "Evil is a negation, because it is the absence of truth. It is nothing, because it is the absence of something. It is unreal, because it presupposes the absence of God, the omnipotent and omnipresent. Every mortal must learn that there is neither power nor reality in evil." 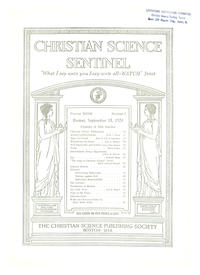