How difficult seem those periods of waiting, of apparent inactivity, when the heavens seem as brass and no sign is given! If only a little word of assurance could be heard, only a whisper that the reward of faithfulness is at hand! Faithfulness! But how can we remain faithful when no activity seems allowed us? Here so-called mortal mind would like to enforce its own belief of activity, which Mrs. Eddy, on page 230 of "Miscellaneous Writings," designates as "travel of limb more than mind." She adds, "Rushing around smartly is no proof of accomplishing much."

In such periods of seeming inactivity, the work done by a faithful student of Christian Science cannot be estimated. As he works in the universe of divine Mind, reflecting the ceaseless activity of Mind, each idea of Truth as it dawns on consciousness brings from under cover some lurking belief of error, which, in turn, must be dispelled by a further accession of the light of Truth. Continuous mental work is necessary, whether it be to put aside the suggestion of some apparently pleasing material issue, or to dispel a picture which has left an impression of fear. "Thus," as Mrs. Eddy tells us in "Science and Health with Key to the Scriptures" (p. 506), "the dawn of ideas goes on, forming each successive stage of progress." 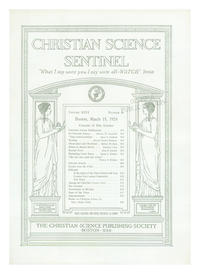