Of course the basic truth expressed in the statement, ''I am the Lord, and there is none else,'' disposes of the contradictory belief in the existence of any other power. Here the question naturally presents itself: Since the allness of omnipotent good necessitates the nothingness of its opposite, evil, why should there be any need to fight at all? Logically, there is nothing against which to fight. That is perfectly true, and when the unclouded comprehension of this fact abides with one, when one is never tempted for an instant to believe in any causation outside of infinite Life, all the fight that ever was will have been won. At that moment heaven is attained, for heaven is reality manifest. Until that constant clarity of spiritual vision is achieved, the warfare goes on,—not, indeed, with any adversary having the might of actuality but with the preposterous shadows of utter falsity, impostors claiming for themselves every prerogative of Deity. 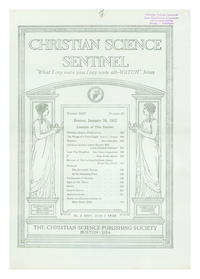