"The Lord whom ye seek"

Through a variety of modes and methods that exceeds the Babel of tongues, the history of individuals and mankind reveals a search for God, the Principle of all being. The most convinced materialist when "times are good," finds himself confronted when "times are bad" with problems whose solution is beyond his theories, none of which have revealed to him First Cause, of which his own very being is the effect. Nor is the orthodox religionist much better off; his devout adherence to creed and dogma has not provided him with a "reason for the hope that is in" him; that is, his doctrine has not shown him how to pursue the argument that there is God to a scientific conclusion in practice. Yet each one, in so far as he is striving to understand the basis of being, is striving, whether he acknowledges it or not, to understand God. Of those who have consciously turned from the ease of material living to seek God with the whole heart, that is, with the prayerful determination to understand Him, there have been comparatively few in the world's history, and in modern times the Discoverer and Founder of Christian Science, Mary Baker Eddy, is the outstanding figure.

Having experienced in an hour of need the power of God to heal, Mrs. Eddy pursued her search to the finding point, proved that what she had found was the truth, and that because Truth, God, is infinite all mankind could seek in the same manner that she had sought, and find God. Describing her search, on page 109 of "Science and Health with Key to the Scriptures," Mrs. Eddy writes: "For three years after my discovery, I sought the solution of this problem of Mind-healing, searched the Scriptures and read little else, kept aloof from society, and devoted time and energies to discovering a positive rule." And she further says, "The search was sweet, calm, and buoyant with hope, not selfish nor depressing." As a result of Mrs. Eddy's patient, fruitful work for mankind, the seeker for God to-day has Christian Science as revealed in Science and Health and Mrs. Eddy's other writings, so that instead of searching wearily for a God afar off he has at hand the one God of the Bible, "our refuge and strength, a very present help in trouble." 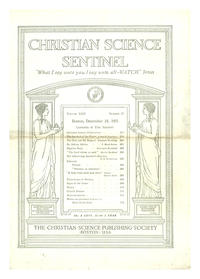