For over ten years I suffered from nervousness, said to...

For over ten years I suffered from nervousness, said to have been brought on by an operation on my throat, together with liver, stomach, and heart trouble. I took one medicine and then another, sought health resorts and the best medical attention available, but with little or no help. Each day my condition grew worse. At last I was invited to give Christian Science a trial, and in less than two weeks was completely healed. Chronic tonsillitis which kept me in bed a week or ten days each month with high fever, was also overcome. This ailment had forced me to give up a good position and seek easier work, and I had been advised not to do office work again as my constitution would not stand it, and it was necessary for me to seek a high and dry climate. I had been rejected by various insurance companies, but a year ago I made application for insurance and was pronounced in perfect condition by the examining physician.

Some months ago, while on the way home from work, I was mistaken for some one else and beaten by a crowd of hoodlums, who finally struck me in the forehead with an instrument which cut through a thick Panama hat and inflicted a severe wound. Remembering the quick and beautiful healing received within two weeks after turning to Christian Science, and having tried ever since to learn more about this great teaching, I declared the truth. In a weak and to mortal sense dangerous condition I dragged myself to the nearest telephone and asked for help. In less than five minutes the flow of blood had stopped. An ambulance had, however, been called by the druggist from whose store I telephoned, and a demand was made that I go to the hospital. Against my will I was taken there and the wound was sewed up, several stitches being taken. I was invited to remain in the hospital a week or so, but my wife, who had been informed of my condition, arrived at the hospital and insisted that I should return home, so consent was granted. The following morning I visited a practitioner, and in two days was back at work. An interne at the hospital told me I would be disfigured for life, but without very close examination no one could tell a scar remained on my forehead. Not one moment of suffering was experienced and there were no bad after effects. My work requires a person free from nervousness, but I work day in and day out without the slightest inconvenience.

Send a comment to the editors
NEXT IN THIS ISSUE
Testimony of Healing
It is now seventeen years since I first began the study of... 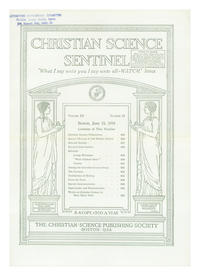