The difficulty in giving a testimony of benefits received...

The difficulty in giving a testimony of benefits received through Christian Science is in knowing where to begin and where to stop, for Christian Scientists have so much for which to be grateful. Three years ago I became interested in this wonderful explanation of Christ's teachings through the evidence of its truth as borne in on my thought by a friend's healing of tubercular disease in an advanced stage. I did not begin the study for physical healing, but from a desire to seek and know the truth; and my thought has been greatly changed, so that I am learning to see life from a spiritual viewpoint. Whereas my children and I were continually experiencing illnesses, we are now manifesting almost perfect health; whereas our supply was apparently very limited, we now have more in a material way, as the result of knowing that God is the source of all good. I have learned to reflect love toward those who illtreat me and thus bring about a right attitude on their part.

The healing that stands out most clearly in my recollection, occurred over two years ago when I was suffering from all the distressing symptoms of influenza. Seeming too ill to help myself, I was treated by the friend whose healing I have mentioned. The result to mortal sense was wonderful, for within half an hour my suffering ceased, and only a sense of weakness remained. The next morning I went twenty miles to spend the day with my sister, while in years past I used to be ill for a week or two with this trouble, from which I had suffered many times. I have not had an attack since.

Send a comment to the editors
NEXT IN THIS ISSUE
Testimony of Healing
On two occasions, three years apart, I met with an accident... 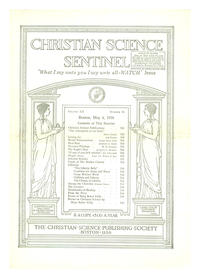