The irrigation of Egypt is dealt with in the recent report of the under-secretary of state on the ministry of public works. Two important undertakings, he says, have been concluded in the department of drainage and construction since the beginning of the European war. These are the main works of the Cairo drainage scheme and the Gezireh bridge. Of new works remaining to be done the largest is the reclamation of uncultivated land, such reclamation to be supplemented by the extension of perennial irrigation to the yet unconverted areas of Upper Egypt. The undertakings in prospect demand a heavy expenditure but promise large returns, for upon their completion 1,000,000 acres, only half irrigated at present, will have been furnished with deep drainage and efficient irrigation, and 1,800,000 acres of entirely new land, properly watered and drained, will have been provided. During the past thirty years an annual average of 30,000 acres of entirely new land has been added to the taxable soil of the country and now produces two crops a year. There are altogether 2,400,000 acres of uncultivated land which may be made to produce two crops a year, and there are 1,200,000 acres which may be made to produce two crops a year instead of one, as at present. It is estimated that beyond the supply available at present, an annual storage of about eight billion cubic meters of water will be required. Toward the extra supply ultimately necessary in normal years the White Nile reservoir would probably contribute an effective storage of three billion cubic meters. More water might be obtained from works on the Blue Nile, and the training of the river in the sudd region and regulation of one or more of the Great Lakes might complete the work.

Protection of the Rittman gasoline process from monopolistic control is sought in a resolution passed by the United States Senate. It authorizes the secretary of the interior to accept Rittman's patent rights and to issue permits for the use of the process to individuals or corporations on terms requiring permittees to patent in the name of the Government all improvements made in the process. The authority was asked by Secretary Lane, as without it he could not accept the Rittman rights and they might revert to Rittman or to some corporation to whom he might desire to transfer them. Secretary Lane says:— 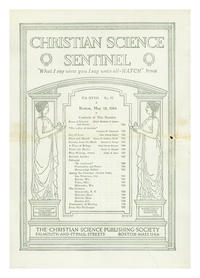