Every reader of the Observer knows people who have failed...

Every reader of the Observer knows people who have failed to get relief by materia medica, and at least some of them know of people who have been healed by Christian Science after medicine had failed. Now, who among them would approve of the efforts that are being made by coercive medicine to prevent individuals from employing the method of treatment which they have found to be best suited to meet their own individual needs, no matter what the method may be? Surely, cures should carry more weight than mere claims.

If departure from popular medicine brands one a medical impostor, then the only infallible healer the world has ever known was also the world's most notorious charlatan. According to the reasoning of the Journal of the American Medical Association, Jesus of Nazareth and the Science of Christianity which he taught and practised would today be deemed inimical to both the health and morals of the public, But what Christian could agree with such a conclusion? The Journal lays great stress on the importance of physical diagnosis in the successful treatment of the sick, but did it ever occur to the Journal that physical disease is merely an effect, and that drugging and cutting an effect does not in any sense remove the cause? This explains why, in many cases, diseases which for a time seem to be cured by medical treatment recur again and again.

Send a comment to the editors
NEXT IN THIS ISSUE
Article
It is regrettable to notice that an evangelist has stepped... 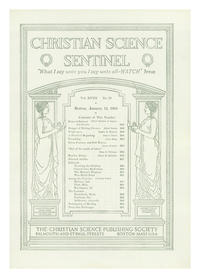