The United States department of agriculture is at present superintending another bird census. The first comprehensive census of this kind was taken last year, and with good results. Ultimately it is expected that the entire country can be included in this annual count of the bird population, and when this has come about, it will be possible for the government to begin the collection of statistics that will possess permanent value. The census of 1914 was the most nearly complete in the northeastern states. South of the Potomac river and west of the Alleghanies it was not all that could have been desired. It is the belief of departmental officials that within a decade — perhaps sooner than that — the annual bird census will fully cover the entire country. When that is done, the department's experts will be in a position to know what additional protection is needed and for what particular kinds of birds.

The census of 1914 disclosed the interesting fact that there are sixty pairs of English sparrows to the square mile, on the average, throughout the United States, or seven to every one hundred native birds; and that seemingly the bird found most abundantly in the country is the robin, with the English sparrow a close second. In the northeastern states, where the count was most thorough, there were on an average six pairs of robins to each farm of fifty-eight acres. Of English sparrows there were five pairs to a farm. No other bird is anywhere near so numerous as either of these, but some are numerous enough to make their total run well into the millions. Taking the one hundred robins as a unit, other desirable birds were noted in the following proportions: catbirds, 49; house wrens, 28; brown thrashers, 37; kingbirds, 27; bluebirds, 26. The statistics regarding bluebirds are particularly gratifying, say departmental authorities. Only a few years ago nearly the total bluebird population of eastern United States was destroyed by a severe winter, but there are now, it is said, several million bluebirds in that locality.

Send a comment to the editors
NEXT IN THIS ISSUE
Article
The Memorial to Mrs. Eddy 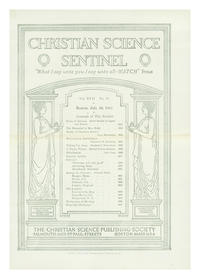