Bearing Up the Ark

In the seventh chapter of Genesis we have an account of the beginning, increase, and continuance of the flood, an episode which, like most others narrated in the Bible, is symbolic in many points of the varied individual experiences of Christian Scientists. Perhaps some so-called fatal disease has been cured, and the one to whom proof has thus been given, enters into the ark, which is defined in Science and Health as "safety" (p. 581). For him safety lies in the dawning perception of man's true being as "coexistent and eternal" with God. Perhaps he has been driven into this haven of refuge by longings which no creed or dogma had hitherto been able to satisfy; at any rate, he has accepted the fundamental truth of Christian Science, that man is a spiritual being, as the basis of his future thought and action. What happens next? It may be that a time is given him in which to rejoice in his new-found sense of deliverance without severe tests being put to the sincerity of his convictions, or the light may be so vivid as to enable him to reflect immediate healing and help to others, and to meet without difficulty every trouble which assails himself.

Sooner or later, however, the waters begin to rise! Old false beliefs show themselves as deeply rooted; friends and relatives oppose and obstruct his peaceful way, or truth stirs up the deposits of wrong thought and habit, even as Mrs. Eddy has said, "Error will hate more as it realizes more the presence of its tormentor" (Miscellaneous Writings, p. 278), all of which explains the statement of Isaiah: "I form the light, and create darkness: I make peace, and create evil." Last but not least, mental apathy within and animal magnetism or hypnotism from without, call for recognition on the student's part and for an assertive overcoming. No shaft that is aimed at him, however, can harm if he is alert to obey the command of Science that we be a law of denial to all such things. Constant watchfulness is needed to detect the different processes by which one is being tempted. 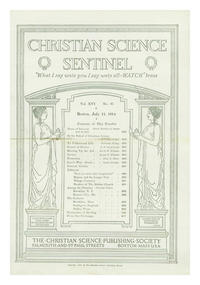