It is said that each one comes to Christian Science in his...

It is said that each one comes to Christian Science in his own way. In my case it was not because of any material need, nor indeed was I at first conscious of any great spiritual lack. Scientific and professional success, foreign travel and other means of culture, hosts of friends, and not least, a happy home life,—all were mine. In addition I held a position of growing responsibility in a religious body to whose traditions I was attached by every tie of family and habit of mind. But through all this, deep down, was the longing for the truth, truth which should satisfy, which should be effective. I looked for something which should save men, regenerate them without the whip of fear or the stimulant of an unreflective emotion.

I knew many earnest social workers, some well known among all who care for the welfare of others, and I knew also many kind and gentle-minded people who in less prominent ways were devotedly striving to help their fellow men. Yet the core of the problem seemed to elude them all. Like my good friends in the medical profession, they appeared to be dealing with symptoms, not causes. My own religious conclusions were useful enough as a fair-weather philosophy, but I had had painful evidence of their ineffectiveness in times of trial. One could talk about the truth and hear much talk about it, but the truth itself seemed far off.

Send a comment to the editors
NEXT IN THIS ISSUE
Testimony of Healing
At the first Wednesday evening meeting I attended, a little... 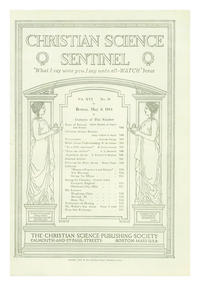