Under recent date there was published an account of a...

Under recent date there was published an account of a sermon delivered in your city, in which Christian Science is attacked. For fifty years it has been subject to assault of this character, and during that time this great movement for good has shown a growth in every direction unparalleled by anything yet witnessed in the religious world. The first direct reference to Christian Science comes in the statement that this religion, associated in the article with several other doctrines and religious beliefs, cannot stand the test of what is called the "Five R's." We find no allusion in the Bible to the "Five R's," and therefore assume that this is a man-made test which the critic would have us accept as final.

The first of the R's mentioned is, "Ruin by the fall." We suppose reference here is had to the incident in the garden of Eden and to the fall of Adam as outlined in the third chapter of Genesis. Christian Science, in its elucidation of this part of the Scriptures, calls attention to the first chapter of Genesis, in which the creation is portrayed, wherein "God saw every thing that he had made, and, behold, it was very good." In the second chapter we find that "there went up a mist from the earth," and a deep sleep fell upon Adam. The first three or four chapters of Genesis, therefore, portray both the true creation and the false concept thereof, the former of God, and the latter a delusion caused by the "mist" and resulting in the Adam-dream, whence comes what modern theology is pleased to call "the fall." "This is explained in Christian Science (supported absolutely by the Bible) to be the false or material sense of creation, which sense Jesus the Christ came to destroy.

Send a comment to the editors
NEXT IN THIS ISSUE
Article
Having read with interest the different views expressed in... 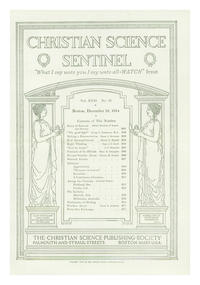